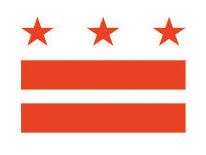 The executive branch is governed by an elected Mayor who serves a 4-year term.  The Mayor has the sole authority and responsibility for the daily administration of the District government.  The City Administrator is appointed by the Mayor and is responsible for the day-to-day management of District government agencies, setting operational goals and implementing the legislative actions and policy decisions of the Mayor and DC Council.

The current organization of the District government also includes four Deputy Mayors who, reporting through the City Administrator, manage the day-to-day operations of agencies within a defined cluster.

Although most District agencies report directly to the Mayor, some agencies are independent or classified as regional bodies.  For example, the Office of the Chief Financial Officer is an independent agency (an arrangement that is unique to the District government).

The Legislative Branch also consists of 41 Advisory Neighborhood Commissions.  ANC’s represent a small sub-set of each Ward in the city, thereby having the closest official ties to the people in a neighborhood.  ANC’s present their positions and recommendations on issues to various District government agencies, the Executive Branch, and the Council. They also present testimony to independent agencies, boards, commissions, and Federal agencies.